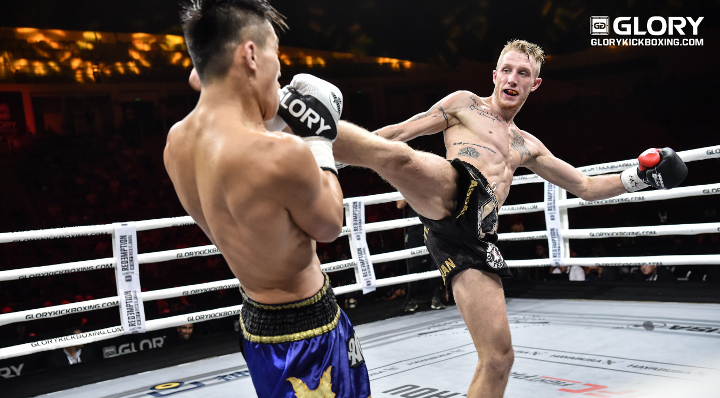 Pascal Schroth came to Guangzhou, China to make his GLORY debut against Quinghao Meng, who was already 1-0 in the organization and looking to extend that to 2-0 via a win on home soil.
The local crowd were heavily in favor of Meng but that did not deter Schroth, who came to the ring determined to give a spirited account of himself. His efforts paid off in a split-decision win which spoiled Meng’s hopes.
Both fighters put on a skillful display, with plenty of eye-catching techniques deployed throughout the fight.
Schroth executed some of the more dynamic moves of the bout, leaping into flying knees and jumping switch-knees and causing Meng to think twice about stepping forwards.
Meng’s boxing was tight but he showed that he is still in the process of transitioning into GLORY rules. His background is in Sanda, where the rules allow for fighters to clinch and then throw their opponents.
That can’t be used in GLORY and there were several times where Meng changed levels and entered a low body clinch, a precursor to executing a throw, but would then catch himself and hold the position until the referee broke them up.
He also got warned for catching kicks and holding the leg too long instead of firing back immediately, another key difference between Sanda and GLORY rules.
These were minor details though and did not significantly effect the fight. Over the course of three rounds both scored well. It was a close fight and both raised their arms in victory when the final bell sounded.
The result could have reasonably gone either way but Schroth edged it, three of the five judges having him the winner.