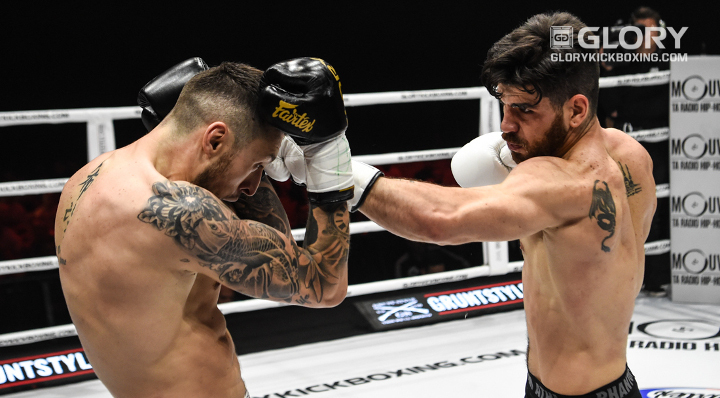 At GLORY 53 LILLE, Alan Scheinson finally got in the judges’ good books.
Following a stretch of split-decision losses, Scheinson had begun to question what it was he was doing wrong in the judges’ eyes.
But there was no doubt in the minds of the five-judge panel for his GLORY 53 fight with Anghel Cardos.
Scheinson dominated the vast majority of the three-round bout, although to be fair Cardos had taken the fight on four days’ notice and was the clear underdog.
The Romanian latecomer proved perhaps tougher than Scheinson expected; despite the Argentinian’s best efforts he couldn’t get him out of there inside the distance.
It’s not a win that does much to move him up the rankings, but he knows exactly what he wants next: a rematch with Murthel Groenhart.
“We’ve got unfinished business from that first fight. He talked a lot of things and then the judges gave him the split-decision win and I didn’t agree with that at all. So yeah, I want that one again,” he said backstage after his fight.
“I’m always training, always fit, always ready, so let’s go. Anytime Murthel wants it, I’m ready.”