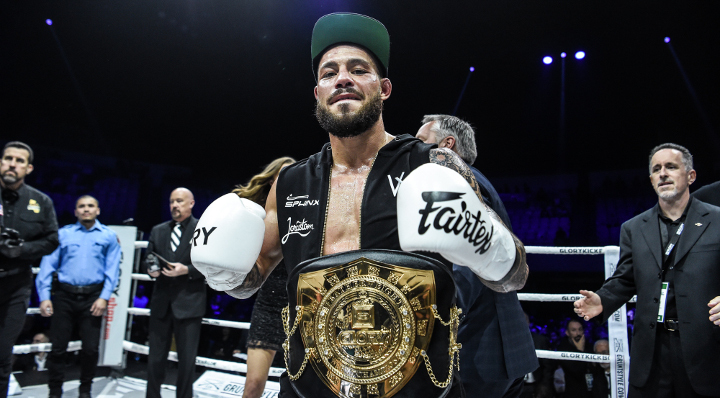 Robin van Roosmalen is the undisputed featherweight champion of the world.
‘Pokerface’ retained his world title and removed VanNostrand of the interim world title via a dominating performance which raised the question of whether his nickname might warrant changing to ‘Relentless’.
Van Roosmalen’s dominance of the division has been such that when this fight was first matched, the majority opinion among the fanbase seemed to be that VanNostrand had almost no chance of even going the distance, let alone actually winning the fight.
VanNostrand defied his detractors by making the first two rounds competitive. His trademark knee strike found a home over and over and by the second round Van Roosmalen sustained a bloody nose.
The spectacle of Van Roosmalen wearing his own blood was unusual, but marked the end of VanNostrand’s success in the fight. Van Roosmalen clicked into gear and started applying to unbearable pressure which forms the cornerstone of his game.
One of Van Roosmalen’s key strengths is his inexhaustible gas tank, cultivated during endless training sessions and a strict adherence to fitness discipline whether in training camp or not. Van Roosmalen’s stamina is a rock upon which opponent’s spirits break.
Van Nostrand discovered, as many have before, that once Van Roosmalen clicks into gear he becomes almost machine-like, always in range and constantly pouring out combinations. It is a grinding way to fight and in recent years it has proven an almost unbeatable formula.
By the midpoint of the fight Van Nostrand’s aims changed from victory to survival; the fight became an exercise in endurance. Van Roosmalen hammered his legs with kicks, his body and head with hooks and uppercuts.
A finish seemed inevitable and yet VanNostrand’s spirit kept him in the fight while sustaining the kind of damage which has stopped other fighters. Even when he took blows which visibly badly hurt him - such as a fourth-round liver shot - he simply refused to go down.
Van Roosmalen’s victory on the scorecards was a given, but VanNostrand’s stubborn refusal to go down earned him respect from everyone in the arena, including the featherweight champion. Van Roosmalen saluted VanNostrand’s toughness in his post-fight speech - but also made certain to underline his own status as the division’s top dog. The question now is, on tonight’s form, who can challenge him?
Robin van Roosmalen def. Kevin VanNostrand, Unanimous Decision (48-47, 49-46, 49-46, 49-46, 49-46)