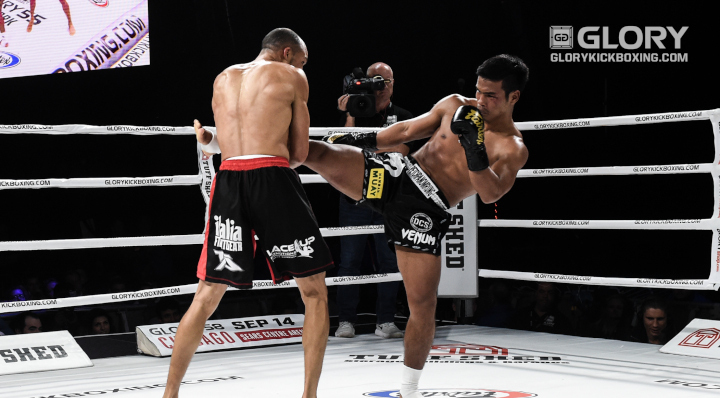 Petchpanomrung went straight back to kicking in round two. Vannostrand delivered straight punches before the pair clinched along the ropes. That would set the tone of the round as the shorter Thai fighter frequently ducked under the punches of Vannostrand.

Heavy knees to the thighs connected from both fighters. The referee warned Petchpanomrung for clinching and threatened a point deduction. The fighters toppled over the ropes as the round closed.

The calf kick was the weapon of choice for Petchpanomrung to open round three. He then delivered a right hand, but Vannostrand took it well and came back with punches of his own.

The fighters got busier in the clinch as the fight entered the championship rounds. Both fighters connected with punches from close quarters. Petchpanomrung was deducted a second point for kneeing Vannostrand from the clinch. He responded with heavy low kicks that sent the American to his back multiple times.

As the fifth and final frame began, Petchpanomrung cracked the body of Vannostrand with a right kick. The clinching continued despite the repeated warnings from the referee.

Petchpanomrung looked to attack the liver, but Vannostrand answered with a right hand. The grueling round and fight went the distance and the judges were called upon to determine the outcome.

The judges returned a split verdict — largely due to the point deductions — butPetchpanomrung walked away with the win and the title.

“I was worried after the point deductions. I made some mistakes,” admitted the winner.

“I’m so happy I get another chance at van Roosmalen,” said the Thai fighter. “We’ll see each other in the next fight.”