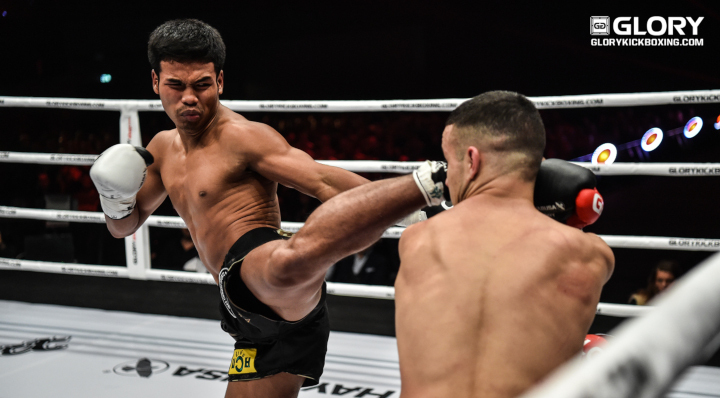 Petch: “When VanNostrand drops his hands, the head kick is coming!”

Petchpanomrung Kiatmookao (159-36-2, 27 KO’s) was resting after a hard morning’s training session at Kiatmookao camp last week when a phone call came in to tell him that Robin van Roosmalen was injured and would be pulling out of their GLORY 55 NEW YORK title fight.
But his initial surge of disappointment quickly turned to curiosity as he learned that he would now be facing former interim champion Kevin VanNostrand instead, with an interim belt on the line.
VanNostrand (17-2, 12 KO’s) is a tall, very mobile karate stylist - almost the complete opposite of Van Roosmalen.
And while he lost a unanimous decision to Van Roosmalen at GLORY 52, he’s proven highly dangerous for most of his other opponents, with 70% of his wins coming by stoppage.
“He is tall and he has a lot of range. Very different to Robin. So that means the tactics have to change,” says Petchpanomrung via his British-Thai cornerman Adrian Shead.
“I think I will use the left kick at short-to-medium range but also really let my hands go in this one.
“I will stand my ground, apply pressure, and if he drops his hands then the head kick will be coming! I think this is going to be a fun fight for people to watch!
“I want to thank Kevin for stepping up to take this fight and good luck to Robin in his recovery from injury.”
Shead, who works with the Fairtex brand as well as the Kiatmookao team, also had some thoughts to add.
“We were disappointed when we got the call, obviously, but winning this fight wins us the interim title and that puts us in position for an immediate title shot as soon as Robin is back,” he says.
“Indications are that Robin should be able to compete by September. I know there’s an event in Amsterdam that month, huge event at Amsterdam Arena, so hopefully we can fight Robin on that card for the undisputed world title.
“As for this fight with VanNostrand, we don’t see it going the full five rounds. We want to get the job done in three rounds and end it with a knockout.”
GLORY 55 NEW YORK takes place at the Hulu Theater at Madison Square Garden on Friday, July 20.
It will air live in the USA on ESPN NEWS from 9:30 p.m. ET / 6:30 p.m. PT and will re-air Sunday, July 22 at 9 p.m. ET / 6 p.m. PT on ESPN 2.