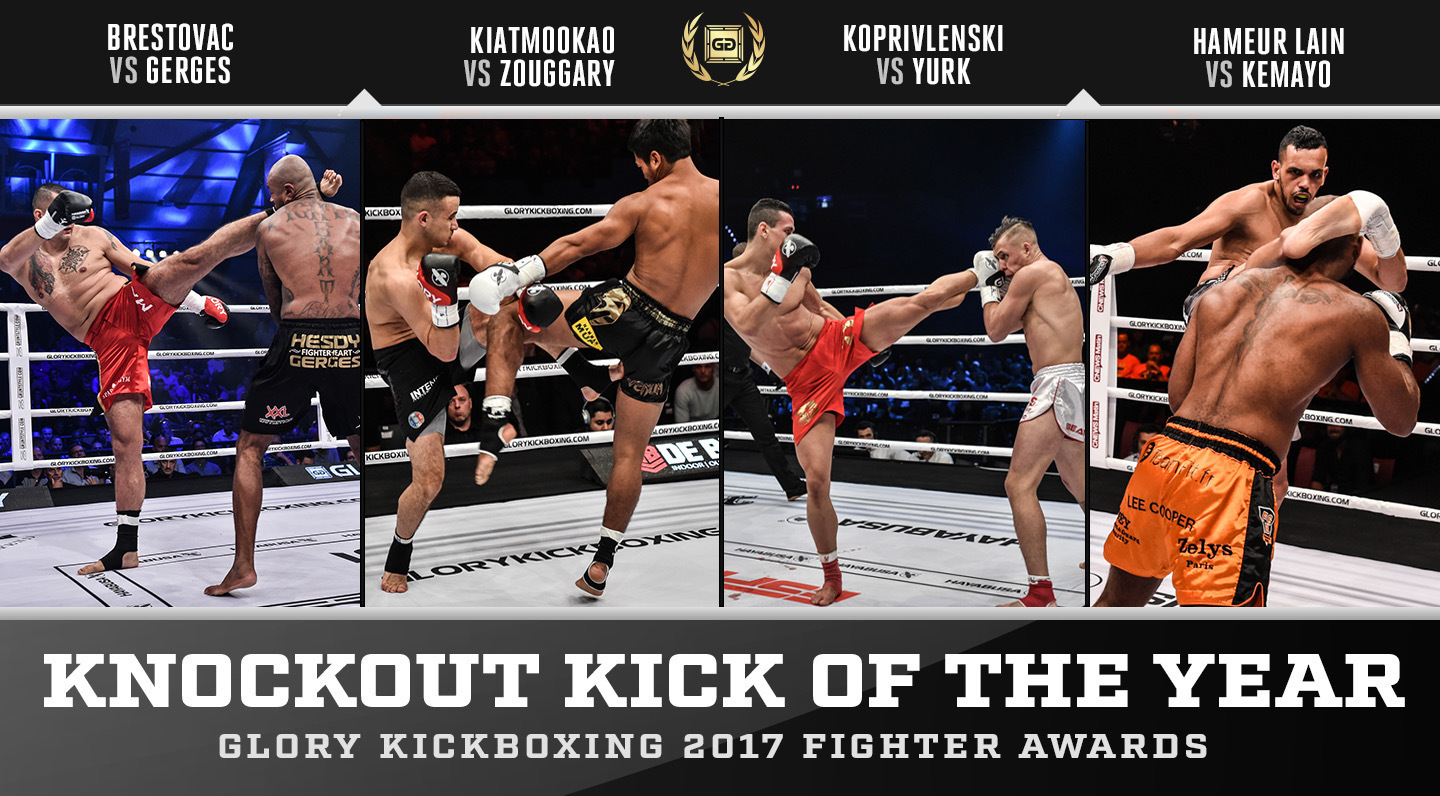 GLORY Kickboxing fights have the highest finish rate of any combat sport. But even by usual standards, 2017 was a busy year when it came to knockout finishes.

In fact there were so many potential candidates for ‘Knockout of the Year’ that the award has been split into two this year, prompting the creation of the ‘Knockout Kick of the Year’ award.

There were sterling efforts in almost every weight class, but these four really stood out.

Croatian giant Mladen Brestovac and his Amsterdam counterpart Hesdy Gerges wasted no time getting stuck into each other at GLORY 45. The result was one of the year’s shortest fights and most emphatic finishes.

Gerges went to work with low kicks early on. Brestovac timed Gerges’ output and then fired back a head kick from his southpaw stance. It crashed through Gerges’ guard and stopped him instantly, ending the fight in just thirty-six seconds.

Two of the featherweight division’s top young contenders met in a key battle on the GLORY REDEMPTION pay-per-view card in December, with the winner promised a title shot.

Things were cagey between them for much of the fight as they both took each other seriously as a threat and were wary to open up too much. But then in the third round Petchpanomrung saw his opening and landed a head kick which ended Zougarry’s night.

KNOCKOUT OF THE YEAR CONTENDER FOR PETCH IN THE FIRST FIGHT OF THE NIGHT!!! #GLORYRedemption

Koprivlenski is a relative unknown but his team aren’t. His team mates at Mike’s Gym also talked him up heavily before December’s Lightweight Contender Tournament, particularly highlighting how dangerous his kicking game is.

Brazil’s Yurk, a GLORY veteran in comparison to Koprlivlenski, found out about Koprivlenski’s kicks the hard way when he was floored by a head kick just seconds before the end of the first round.

Hameur-Lain had proven to be a heavy-handed puncher in his GLORY run up to this point. In June, he also demonstrated how dangerous his kicking is as well.

Kemayo is a veteran campaigner who had spent most of his career at heavyweight prior to joining GLORY. He won his light-heavyweight debut and Hameur-Lain was his second outing in his new weight class.

It was not a success for him: at first his experience kept him out of trouble but once Hameur-Lain found the opening he needed, it wasn’t long before a crunching head kick ended the fight.

CLICK HERE to vote for the GLORY Knockout Kick of the Year 2017!