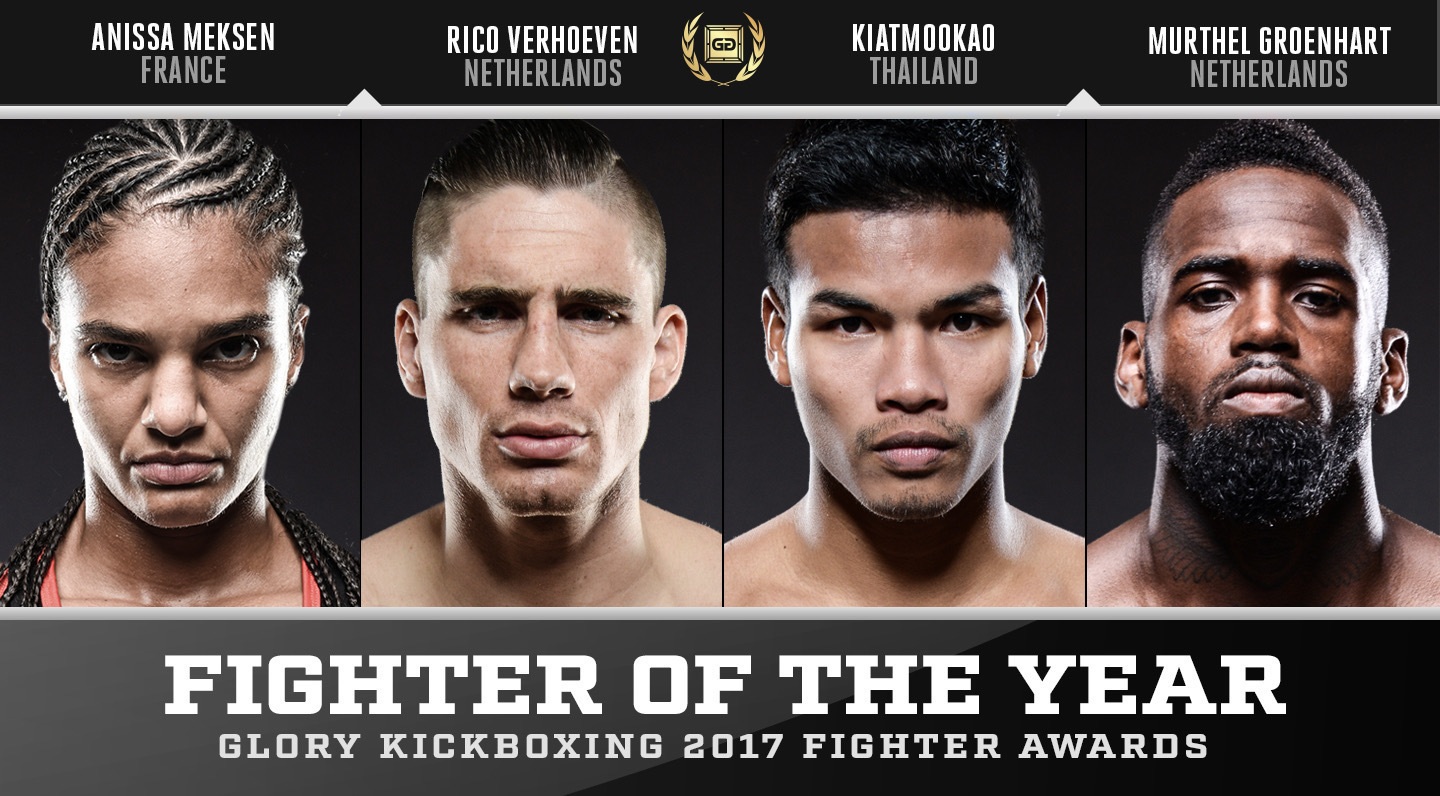 Nominations: GLORY Fighter of the Year 2017

Competition is always intense for the flagship category of the year-end awards but this year’s shortlist is particularly stacked: three world champions and a top contender who only narrowly missed out on holding a belt himself.

Here’s the four contenders for GLORY Kickboxing’s ‘Fighter of the Year 2017’:

GLORY’s heavyweight champion had a high-profile year in and out of the ring in 2017. He fought a showcase bout in his native Holland before traveling to China to headline GLORY’s debut event there and then finished the year with a thrilling fight against Jamal Ben Saddik.

Outside of the ring Verhoeven continued his march towards mainstream celebrity, including a starring voice role in the Dutch edition of the major animated movie Ferdinand, in which he voiced the eponymous lead character. He laughed that the role impressed his two young daughters “more than anything I’ve done in kickboxing!”

The likeable Thai youngster showed huge potential for success on the Muay Thai circuit in his native Thailand, where he competed at a high level at an early age, but his team also saw potential for him on the world kickboxing stage and steered him in that direction.

Muay Thai’s loss has been kickboxing’s gain - ‘Petch’ has proven a big hit with fans. His high level of technical ability and likeable personality is combined with a killer instinct which adds edge to his performances.

He was unlucky to lose a judges’ decision against defending champion Robin van Roosmalen in May. He went 4-1 in GLORY last year, ending 2017 with a head kick knockout win over Zakaria Zougarry at GLORY REDEMPTION to put himself in title contention once again.

‘The Predator’ has been a contender in the welterweight division ever since arriving in it. A memorable rivalry with Nieky Holzken brought him close to winning the title on two separate occasions but judges edged him out.

At GLORY 44 CHICAGO, Groenhart met bitter rival Cedric Doumbe for a rematch. Doumbe wore the world title into the fight but left without it as Groenhart eluded his tricks and deployed a few of his own on the way to a decision victory.

Meksen started 2017 with a 0-0 record in GLORY but ended the year with a 3-0 record in the organization and the World Super-Bantamweight Championship belt around her waist.

VOTE NOW for the GLORY Fighter of the Year 2017!