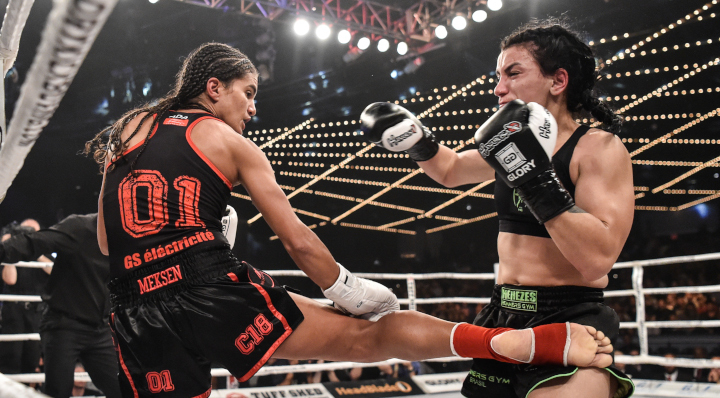 Undisputed world champion Anissa Meksen travels to the USA next month to defend her GLORY super-bantamweight title in the co-main event of GLORY 56 DENVER.
Meksen, one of the world’s most decorated kickboxers, is undefeated in GLORY and boasts an incredible 96-3 professional record, with thirty of those wins by knockout.
Her upcoming title defense is thus also her 100th professional fight, a rare and remarkable achievement in itself.
Standing opposite her in Denver will be Jady Menezes (12-1, 5 KO’s) of Brazil.
Menezes hails from the famous fighting city of Curitiba, the home city of Anderson Silva, Wanderlei Silva and ‘Shogun’ Rua among others.
But the Curitiba fighter she most looks up to is Cris ‘Cyborg’, UFC women’s featherweight champion. It was ‘Cyborg’ who inspired a young Menezes to put on gloves and begin training.
Meksen and Menezes made their respective GLORY debuts against each other, back at GLORY 43 NEW YORK last summer.
Since then Meksen has won the world title and Menezes, occupying the #4 slot in the rankings, is stepping up to take a shot at her.
In the intervening period Meksen has performed in a way which lends credence to her declarations that she is the best female striker on the planet.
Has Menezes learned enough since their first fight to flip the script on Meksen and take the title belt home to Brazil? We will find out on Friday, August 10 at the 1st Bank Center in Denver, Colorado.
GLORY 56 Denver will be carried live on ESPN2 at 12 a.m. ET / 9 p.m. PT on Friday, Aug. 10.