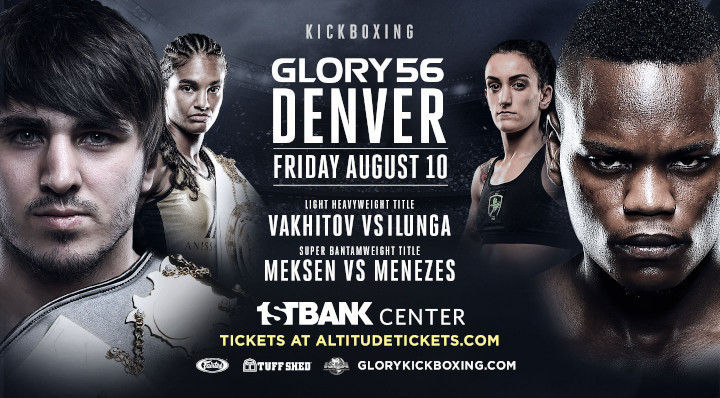 Featherweight Massaro "The Project" Glunder (31-12-4, 20 KO, fighting out of the Netherlands) was looking for a new dance partner and now he has one in Quade "The Magician" Taranaki (5-5, fighting out of New Zealand). Their exciting showdown joins GLORY 56 Denver, a card that already includes two world title bouts and top-10 featherweight action.

The four-fight GLORY 56 Denver card can be found below:

The six-fight GLORY 56 SuperFight Series card can be found below:

Four additions have been made to the GLORY 56 prelims:

The five-fight GLORY 56 preliminary card can be found below:

The final three GLORY 56 prelims will stream live on the GLORY YouTube channel, as well as the GLORY Facebook page, and Pluto TV channel 215 on Friday, Aug. 10, with an expected start time of 8 p.m. ET / 5 p.m. PT.

Tickets for GLORY 56 Denver (including access to GLORY 56 SuperFight Series and the GLORY 56 prelims), with prices ranging $45 - $170, are on sale now and available for online purchase at altitudetickets.com or by phone at 866-461-6556.

GLORY 56 Denver will be the promotion's second event during the Summer of GLORY 2018, a five-city campaign featuring can't-miss events in New York, Denver, Shenzhen (China), Chicago and Amsterdam.