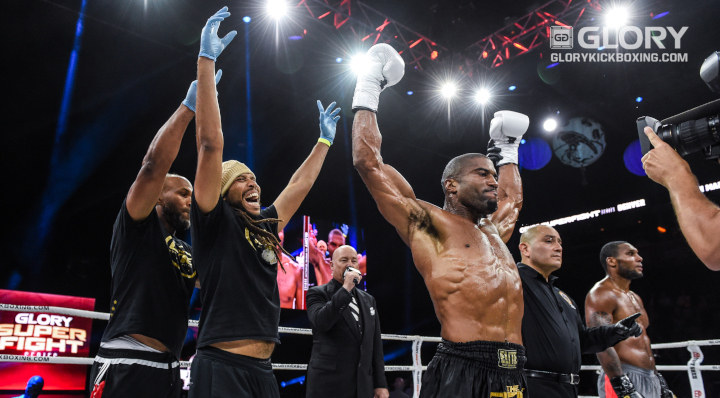 The pair’s initial meeting came at GLORY 20 in Dubai, with the Canadian Marcus winning via split decision. The Dutchman Wilnis exacted revenge at GLORY 33, earning at third-round TKO and the title.

Marcus returned the favor at GLORY 40 in Copenhagen, again besting Wilnis on the scorecards and recapturing the belt.

The stylistic clash was obvious right away as the Dutch technique of Wilnis was offset by the Muay Thai of Marcus. Wilnis marched forward with a high guard, firing low kicks.

Marcus answered with a high kick attempt and then a heavy knee to the stomach of Wilnis. Marcus circled the ring on the outside as Wilnis continued to advance. Marcus threw with more volume, but very few shots got through the tight defense of Wilnis.

Marcus fired combinations to kick off round two, but a counter right hand from Wilnis landed. The step-in knee of Marcus repeatedly found a home in the clinch, but it did not nothing to slow Wilnis down.

Suddenly a heavy low kick from Wilnis sent Marcus to the canvas. Marcus got up and immediately answered with a front kick that sent the mouthpiece of Wilnis flying across the ring to close the frame.

The two rivals showed respect by touching gloves in the final stanza before a thundering uppercut from Wilnis was met with another big knee in the clinch from Canada’s Marcus.

The referee warned Marcus for holding, as he frequently initiated the clinch. Despite the volume thrown by Marcus, Wilnis came forward like the Terminator. The pair exchanged punches to the final bell, but left the result in the hands of the judges at ringside.

After yet another hard-fought battle, the judges were split for a third time. But, like the previous times the pair saw the scorecards, it was Marcus who came out on top.

“It was alright. I could have done better,” said Marcus of his victory. “It was a weird performance from Jason.”

“Now I want my title back, I want a rematch with Alex Pereira. I am going to get my belt back.”