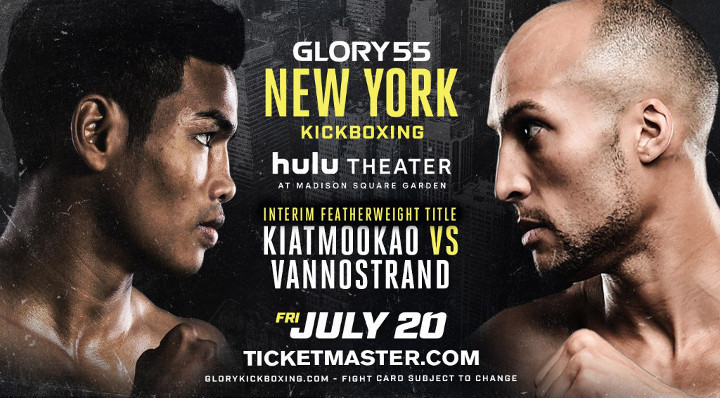 DENVER – Robin van Roosmalen will not be defending his featherweight world title at GLORY 55 New York.

"I tried to work through it, but it became too difficult," said Van Roosmalen. "I'm disappointed to have to pull out of the fight. I'm sorry to let my fans down, but I think they know that I would only pull out for something serious. Health is the most important thing, so I need to get back to 100% and then I will be back to remind people who the featherweight boss is."

While the champion recovers and prepares to return to action, GLORY will establish an interim featherweight title at GLORY 55 New York, broadcast live from The Hulu Theater at Madison Square Garden on Saturday, July 20.

Twenty-two-year-old Petchpanomrung, more commonly referred to as "Petch," has won three in a row. Two of those three victories came by way of head kick, including a 2017 Knockout of the Year contender against Zakaria Zouggary in December, and what's sure to be a Knockout of the Year nominee for 2018, submitted against Abdellah Ezbiri in May.

Vannostrand, seeking his second stint as interim champion, hails from New York and is undefeated under the lights of The Hulu Theater, racking up wins over Giga Chikadze, Anvar Boynazarov and Mo Abdurahman last year.

GLORY is seeking an opponent for Massaro "The Project" Glunder (31-12-4, 20 KO, fighting out of the Netherlands), who was slated to face Vannostrand before the shake-up.

The updated five-fight card for GLORY 55 New York can be found below:

GLORY 55 New York will be carried:

The updated seven-fight card for GLORY 55 SuperFight Series can be found below:

Tickets for GLORY 55 New York and GLORY 55 SuperFight Series are on sale now and available for purchase at ticketmaster.com or the Madison Square Garden box office.