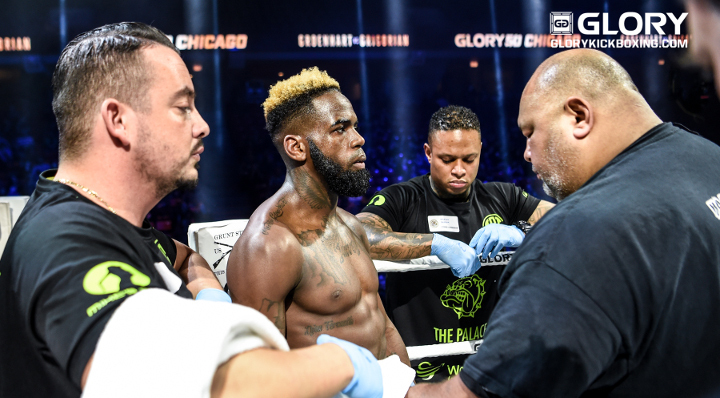 Groenhart: “Congratulations to Harut, but the stoppage was a bad call”

Murthel ‘The Predator’ Groenhart (67-23-3, 38 KO’s) believes the referee stoppage in his GLORY 50 CHICAGO title fight with Harut Grigorian (46-11, 33 KO’s) was a bad call.
The fight was waved off in the first round when referee Chris Wagner determined that Groenhart was unsteady on his feet and could not continue shortly after suffering a knockdown.
Groenhart spread his arms in disbelief as the referee communicated the stoppage to him and his team reacted unhappily, but the call was made and there was no reversing it.
Now back in his home city of Amsterdam, Netherlands, Groenhart remains congratulatory toward Grigorian on becoming champion, but is still unimpressed with the referee.
“I think that was a bulls—t stoppage for a big fight like that. Where a belt is on the line and the champion goes down and gets back up, he should be given the chance to prove himself, show that he’s a true champion,” Groenhart says.
“I didn’t get that chance unfortunately. Harut [Grigorian] is now the champion and congratulations to him, it’s great for him, but I feel like there should be a rematch as soon as possible. That was a bad call from the referee.”
The Chicago fight was the third meeting between Groenhart and Grigorian, with the former going into it 2-0 over his rival, with both wins by stoppage.
He was understandably confident of winning their trilogy fight, but Grigorian brought a fierce intensity to the encounter and channeled that in the first round.
The first knockdown call was beyond dispute and Groenhart was certainly in trouble on the restart; he just disputes the referee’s opinion that he was in too much trouble to continue.
Welterweight has proven to be the most turbulent division in GLORY to date, with the belt changing hands five times since its May 2014 inauguration.
In the last twelve months it has been held by Cedric Doumbe, Groenhart and now Grigorian, with Doumbe having taken it from Nieky Holzken in December 2016.
The top end of the division is evenly matched and the arrival of Alim Nabiyev has only crowded the picture. The welterweight war zone will continue to be an active one throughout 2018.
GLORY’s next event takes place next week, Saturday March 3, with Doumbe and Nabiyev competing in a title shot eliminator bout in the main event of the Superfight Series card at GLORY 51 ROTTERDAM.