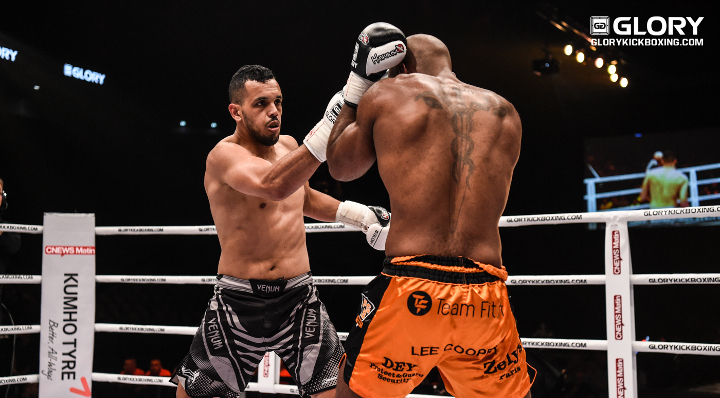 ‘Good Boy’ Hameur-Lain would like to apologize to the fans

Zinedine ‘Good Boy’ Hameur-Lain (58-15, 37 KO’s) would like to issue an apology to any fans looking forward to his GLORY 53 LILLE light-heavyweight clash with Michael Duut (42-9, 19 KO’s).
“Unfortunately you are not going to have much time to savor this fight, because for sure it’s going to end well before the third round,” he says.
With a 65% knockout ratio in his wins and four of his five GLORY wins coming inside the distance, Hameur-Lain is not making idle boasts.
Added to that, Duut has gone the distance just twice in ten GLORY fights - he has three wins by stoppage, four losses by stoppage and also once got disqualified mid-bout.
“Mentally, Michael Duut is very fragile,” says Hameur-Lain. “I can tell you that this fight will very quickly be settled.
“He’s a guy who always comes forward, but really it doesn’t matter what he does. I don’t prepare based on my opponent’s style, I just refine what I am good at.
“All through training, from week to week, fight to fight, I feel better and better. So I am going to take the win here, about that I have no ‘Duut’… I mean doubt, ha!
“But joking aside, I’m so happy to fight in GLORY and so happy to have this chance to prove myself. I want to show everyone - myself, my family, my coach - that I am not playing around. One day the belt will be around me.”
The world championship belt is of course the goal of every fighter in GLORY. The right to challenge for the belt is earned by distinguishing oneself with victories in the ring.
Hameur-Lain’s string of knockouts has certainly done that and if he stops Duut on May 12 he is going to call for a title shot for his next fight.
“Actually I think I already proved enough that I am ready to challenge for the belt. But for sure with a win here I'm going to ask to fight for the title,” he says.
“I trust in myself: my determination, my power, my precision.”
GLORY 53 LILLE takes place Saturday, May 12 at the Zenith de Lille in Lille, France.
The card also features a world lightweight championship fight between Sitthichai and Tyjani Beztati.
CLICK HERE to purchase tickets to GLORY 53 Lille