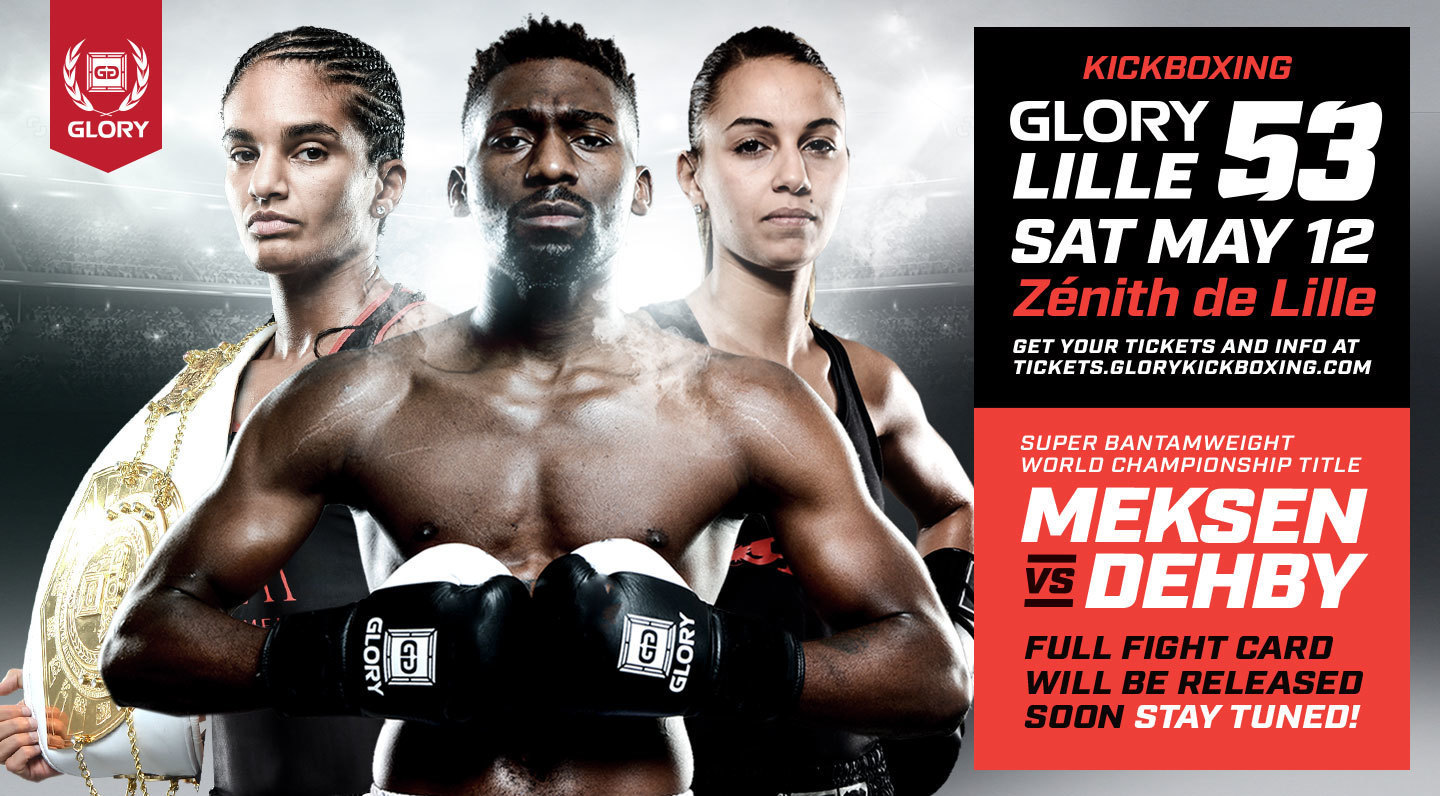 GLORY Returns to France for GLORY 53 Lille and GLORY 53 SuperFight Series on Saturday, May 12

GLORY returns to France once again, bringing the world’s best stand-up strikers to Zénith de Lille for GLORY 53 Lille and GLORY 53 SuperFight Series on Saturday, May 12.

France has become a regular stop for the global striking leader, typically hosting two live events in the country each year, but this upcoming trip to Lille will be the promotion’s first visit to the northern region since GLORY 22 Lille in 2015.

To mark the occasion, many of France’s finest will appear in action, including former world champion and current No. 1-ranked welterweight Cédric "The Best" Doumbé (68-5-1, 39 KO, fighting out of France).

In the GLORY 53 Lille co-headline bout, two of France’s top female strikers square off as Anissa Meksen (94-3, 30 KO, fighting out of France) makes the first defense of her super bantamweight championship, facing countrywoman Amel “Huch Huch” Debhy (29-1, 11 KO, fighting out of France). Though they have crossed paths on the French striking scene, a fight between the two has never materialized… until now!

Since debuting for GLORY in July of 2017, Meksen has compiled a perfect 3-0 record, including a unanimous decision victory over Tiffany Van Soest in December. Dehby returns after suffering the first loss of her career, falling short against Van Soest in the final round of the inaugural super bantamweight championship tournament in late 2016.

Before battling Dehby, Meksen will compete in a 53-kilogram (116.8 pounds) non-title catchweight bout against Ashley Nichols at GLORY 52 Los Angeles on Saturday, March 31.

Comprising one half of the tournament bracket is a semifinal scrap between former featherweight title-holder Serhii Adamchuk (35-9, 14 KO, fighting out of Amsterdam), ranked No. 2 in the division, and French-Moroccan fighter Azize "The Magician" Hliali (17-14-1, 2 KO, fighting out of France).

The complete five-fight card for GLORY 53 Lille can be found below:

In a match-up that’s sure to produce fireworks, heavy-handed Zinedine “Good Boy” Hameur-Lain (57-15, 36 KO, fighting out of France) defends home turf against knockout artist Michael “Dreamcrusher” Duut (42-9, 29 KO, fighting out of the Netherlands). Hameur-Lain and Duut are the light heavyweight division’s third and fourth-ranked competitors, respectively.

Twenty-six-year-old Yohann Drai (14-8, 3 KO, fighting out of France) will make his first appearance inside the GLORY ring, fighting at lightweight and looking to spoil the night of fellow debutant Vlad “Diamond” Tuinov (35-2, 11 KO, fighting out of Russia), just 20 years old himself.

Kiatmookao is ranked No. 4 following his head kick of Zougarry, a “Knockout of the Year” contender, at GLORY: Redemption in December. Ezbiri earned his No. 3 ranking by defeating both Hlali and Boynazarov during the GLORY 47 Lyon featherweight contender tournament.

The current card for GLORY 53 SuperFight Series can be found below:

One additional GLORY SuperFight Series bout is expected to be added to the card.

Tickets for GLORY 53 Lille and GLORY 53 SuperFight Series go on sale to the public at 9 a.m. CET on Tuesday, March 6 and will be available for purchase at tickets.glorykickboxing.com.

This weekend, fans that register (or have previously registered) for the GLORY Fight Club newsletter at glorykickboxing.com/register will have an exclusive opportunity to purchase tickets for GLORY 53 Lille and GLORY 53 SuperFight Series early. Subscribers will receive an email with instructions on how to access the 24-hour pre-sale beginning at 9 a.m. CET on Monday, March 5 and ending when tickets go on sale to the general public.