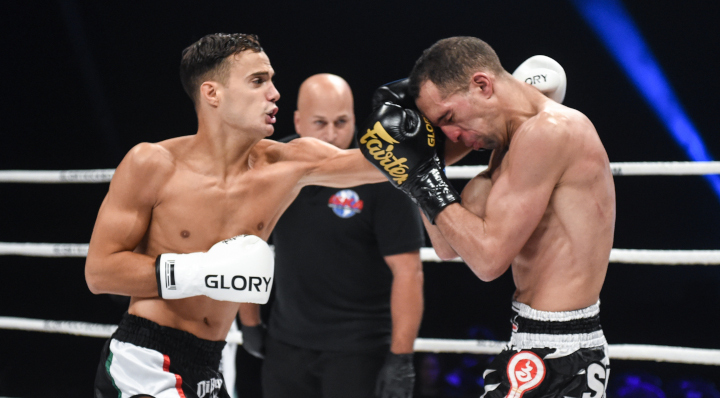 GLORY 61 Preliminary Card Recap: Only one of four fights goes the distance

GLORY Kickboxing returned to the Hammerstein Ballroom in New York for its 61st event on Friday, Nov. 2. The action kicked off with a four-fight preliminary card streaming live on social media platforms.

In the headlining bout, a pair of GLORY veterans, Nate Richardson (12-4, 6 KO’s) and Justin Greskiewicz (41-24-3, 18 KO’s), clashed at featherweight. Richardson’s boxing and power was on display early, as he knocked Greskiewicz down in the opening minute.

After recovering, Greskiewicz tried to keep the fight at range with his kicks. Richardson had no part of it, crowding Greskiewicz and scoring a second knockdown with a left hook to the body.

Greskiewicz again recovered, but only briefly as Richardson backed him into the corner and finished him off with a knee.

“It feels good. I had to come in with everything I’ve got. I wanted to work him and break him down. I never come with anything less than my best,” said a victorious Richardson.

Featherweights Abraham Vidales (12-0, 10 KO’s) and Houssam El Kasri (2-2, 2 KO’s) locked horns in the second-to-last bout on the preliminary card. Vidales connected with a heavy right hand early. He then ripped El Kasri’s midsection with a kick.

The onslaught forced El Kasri to shell up and Vidales went for the kill. He delivered a lead left hook that sent El Kasri crashing to the canvas. El Kasri slowly staggered to the corner, but could not beat the count and the fight was waved off.

Di Bella’s kicks kept Lemjerdine guessing, opening him up for a massive right hook that dropped him. The knockdown came late in the opening frame, allowing Lemjerdine to recover.

Round two featured more combinations from Di Bella. Lemjerdine answered with counter right hands, but he struggled to match the volume of his younger foe.

Di Bella was aggressive early in round three, earning another knockdown with a left hand in first 30 seconds of the frame. Lemjerdine made it to the final bell, but there was no doubt on the scorecards as Di Bella claimed victory.

The night kicked off with a catchweight match-up between Harry Germain (1-0, 1 KO) and Iskander Usmonov (1-1). Germain threw with volume from range from the opening bell.

He quickly rocked Usmonov with a left uppercut along the ropes. Usmonov tried to circle away and recover, but Germain aggressively went for the finish.

The flurry of punches from Germain was too much, forcing the referee to halt the contest after just 40 seconds.