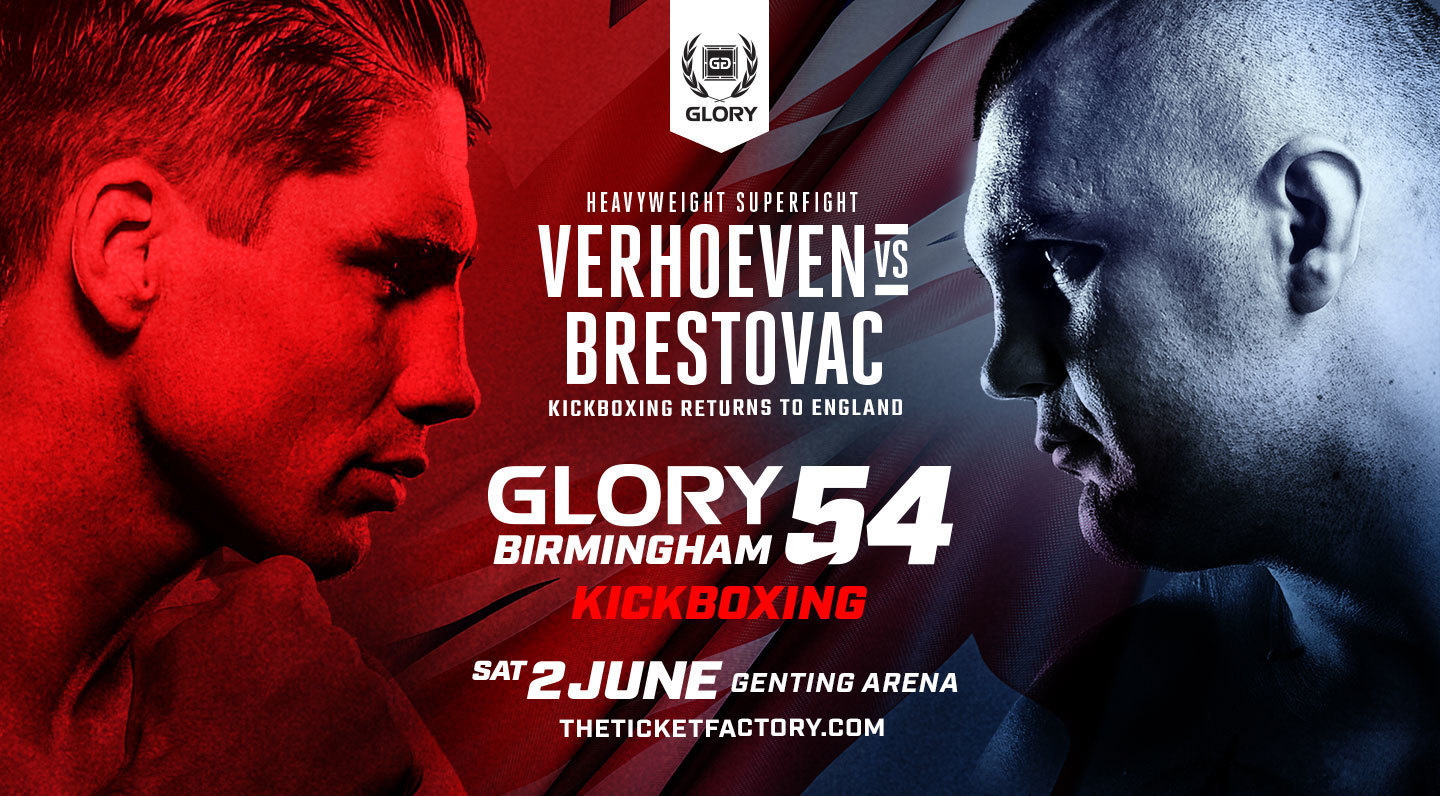 The wait is over. Five years after first landing in London, GLORY finally returns to the United Kingdom later this spring.

One of combat sports' most dominant champions, Rico "The King of Kickboxing" Verhoeven (53-10, 16 KO, fighting out of the Netherlands), sets his crown aside at GLORY 54 Birmingham, taking on No. 7-ranked heavyweight Mladen "The Scorpion Sting" Brestovac (56-12-1, 35 KO, fighting out of Croatia) in a three-round, non-title affair.

Brestovac faced Verhoeven for the GLORY heavyweight championship in 2016, losing via unanimous decision. Since then, he has had his hand raised five times in six fights, including a head-kick knockout that stopped Hesdy Gerges inside one minute.

GLORY welterweight champion Harut Grigorian (47-11, 33 KO, fighting out of the Netherlands) makes the first defense of his world title, squaring off against No. 1 contender Alim "Professor" Nabiyev (49-6, 21 KO, fighting out of Russia) in the GLORY 54 Birmingham co-headline bout.

Following contender tournament wins over Karim Benmansour and Antoine Pinto, Grigorian set his sights on then-champion Murthel Groenhart, settling the score and defeating his rival to capture gold at GLORY 50 Chicago in February.

Undefeated lightweight “Super” Elvis Gashi (20-0, 10 KO, fighting out of the United States) welcomes Blackpool's William Goldie-Galloway (fighting out of England) to the promotion.

The five-fight card for GLORY 54 Birmingham can be found below:

Earlier in the evening, GLORY 54 SuperFight Series showcases a bevy of the United Kingdom's top talent.

Since their first encounter, Baya went on to vie for the GLORY lightweight title against Sitthichai. After falling short in an admirable effort, his lone loss since joining GLORY, the No. 2-ranked Baya looks to rebound against a familiar opponent. Jauncey, born in London and now living in Vancouver, Canada, is coming off a Fight of the Night performance against top contender Stoyan Koprivlenski at GLORY 52 Los Angeles in March.

Recovered from a neck injury that sidelined the Armenian-Belgian star, No. 1-ranked Marat Grigorian (51-10-2, 32 KO, fighting out of the Netherlands) returns against Liu Xu (17-3, 6 KO, fighting out of China), who makes his official debut after fighting on the prelims of GLORY 46 China.

GLORY 54 SuperFight will feature two semifinal bouts of a four-man welterweight qualifying tournament, with the tournament's final round to be contested later this year.

The six-fight card for GLORY 54 SuperFight Series can be found below:

Tickets for GLORY 54 Birmingham and GLORY 54 SuperFight Series go on sale tomorrow, April 18 at 9 a.m. GMT and will be available for online purchase at theticketfactory.com or by telephone at 0844 338 0338.