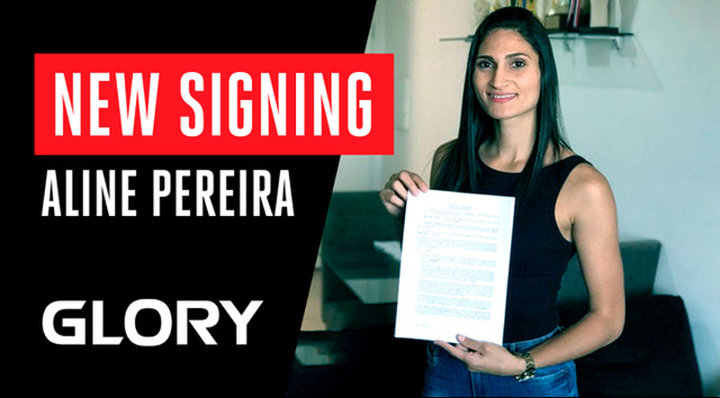 GLORY, the world’s premier stand-up fighting league, has signed Aline Pereira, sister of world middleweight champion Alex ‘Po Atan’ Pereira, to an exclusive multi-fight, multi year deal.
Born and raised in Sao Paulo alongside Alex and their three other siblings, Aline followed her brother into the martial arts. She racked went 21-3 as an amateur before turning professional, where her record currently stands at 5-1, 1 KO.
Pereira is trained by her brother and is his only student. She won a national amateur championship in her native Brazil before turning professional, where she has since competed on the country’s top platform for professional kickboxers.
Her journey will now take her overseas and into contact with the world’s top competitors.
“Power is in my family DNA. All the training I do with my brother is focused on the reality of combat in the ring. He's the best at his weight, so I'll be the best at my weight too,” she said today.
“I think GLORY will evolve me, it will take me to the next stage. I’ve been on a great path so far and I’m in a great place right now: I’ve got technique, I’ve got experience, I’ve got confidence and I am ready to leave my heart and soul inside that ring.”
Marshall Zelaznik, CEO of GLORY Kickboxing, welcomed the new addition to the roster.
“The Pereira’s are making history by being the first brother-and-sister pair to be signed to GLORY. Aline has set a goal for them to be the first siblings in GLORY history to hold belts at the same time,” he said.
“Now she has the chance to see if she can achieve that dream and we’re excited to witness her journey here in GLORY. She is a great addition to the division.”
News of Aline Pereira’s debut for GLORY will be announced in the near future.
GLORY’s next event takes place this Saturday, June 22 in Paris, France.
GLORY 66 PARIS, presented in association with Monster Energy, Litecoin, Fairtex and House of Nutrition, is headlined by Cedric Doumbé defending the world welterweight championship against Alim Nabiyev, training partner of world heavyweight champion Rico Verhoeven.
The card also features world super-bantamweight champion Anissa Meksen defending her title against Sofia ‘The Wolf’ Olofsson and world light-heavyweight champion Artem Vakhitov defending his belt against 21-year-old contender Donegi Abena.