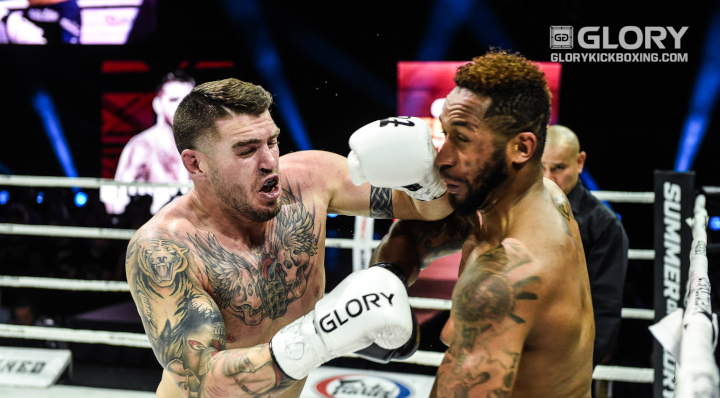 Fighting in front of his hometown crowd and making his light-heavyweight debut, Chris Camozzi (1-1, 1 KO) took on John King (7-5-1) on the SuperFight Series portion of GLORY 56 in Denver.

UFC veteran Camozzi came out aggressively to start things off but King matched his pace and responded with a heavy right hand that wobbled him.

The pair fought into the clinch and clashed heads on the exit, prompting a pause in the action.

King continued his power-punching assault, rocking Camozzi with another right hand. The chin of Camozzi held up, as he delivered left hands and multiple knees of his own.

A large cut opened on the right eye of Camozzi, but he was undeterred, delivering a series of punches along the ropes to close the round.

The pair threw caution to the wind to start the second stanza, throwing wildly along the ropes. Camozzi poured it on with more knees, eventually earning the fight’s first knockdown.

King survived the initial onslaught, but the volume of Camozzi was nonstop. He worked the body with punches, forcing the referee to again start counting.

The bruised and battered King would not recover this time, giving Camozzi the second-round TKO victory.

“It takes a little bit for me to get going, but I always come back. I never quit,” declared the victorious Camozzi.

Asked about what’s next, the Colorado fighter responded, “I’m new to the light heavyweight division, so I’m taking it one fight at a time.”

The win gives the longtime MMA veteran his second win in the GLORY ring, and also his second finish.