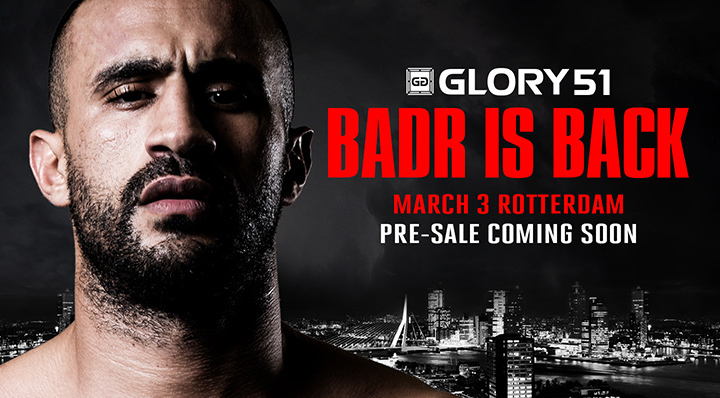 GLORY, the world’s premier stand-up combat league, today announced that renowned heavyweight Badr “The Golden Boy” Hari (106-13, 92 KO, fighting out of the Netherlands) will return to the promotion in 2018.

Hari has signed an exclusive multi-fight agreement with GLORY and is scheduled to headline GLORY 51 Rotterdam, broadcast live from Ahoy Rotterdam in the Netherlands on Saturday, March 3. His opponent and additional match-ups for GLORY 51 Rotterdam will be announced shortly.

“[It’s] a new year; expect great things in GLORY…” said Badr Hari. “For the sake of the public and the sport, we are on the way."

The 33-year-old Moroccan-Dutch icon made his first GLORY appearance against current heavyweight champion Rico Verhoeven in December of 2016. Hari suffered an arm injury in the second round, abruptly ending the highly anticipated bout. Now fully healed, Hari returns to the GLORY ring next year.

Scott Rudmann, Vice-Chairman of GLORY added: “Badr’s back and we’re delighted to add his skills and the excitement he brings to our heavyweight division. It’s time for GLORY!”

Tickets for GLORY 51 Rotterdam go on sale to the public at 9 a.m. CET on Thursday, Dec. 21 and can be purchased at tickets.glorykickboxing.com.

Starting today, fans that register (or have previously registered) at glorykickboxing.com will have an opportunity to purchase premium tickets for GLORY 51 Rotterdam early. Subscribers will receive an email with instructions on how to access the exclusive 48-hour pre-sale that begins at 9 a.m. CET on Tuesday, Dec. 19 and ends when tickets go on sale to the general public.