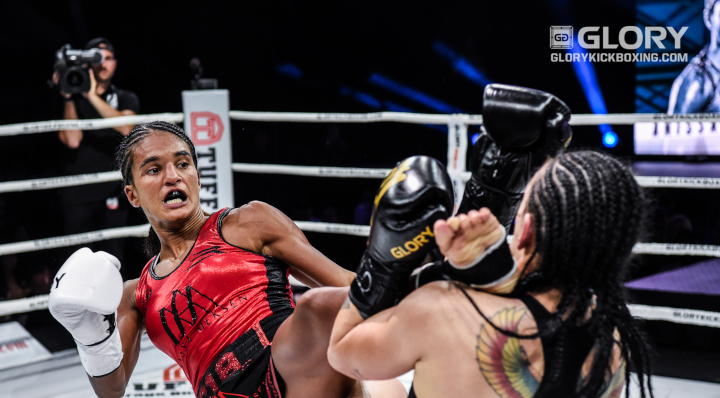 Anissa Meksen has finally broken her silence regarding the controversial GLORY 56 DENVER judging decision which saw her lose the belt to Brazil’s Jady Menezes by way of majority decision.
The pair fought five rounds before going to the judges’ scorecards in the co-main event. Meksen, fighting her 100th professional kickboxing bout, felt confident that she was the clear winner as she waited for the result to be announced - but things were about to take a twist.
“As soon as I heard Tim Hughes say there was “a majority decision”, I realized something was going on, because I knew I had won all five rounds. When I heard the words ‘..and new!’, I felt like I had fallen through a trapdoor,” she says.
“My immediate reaction was just to quickly get out of there, walk away from this joke. This isn’t the first time that something like this has happened to me, but to happen at such a level is scandalous. I was so shocked - and for this to happen in my 100th professional fight!?
“This result is a serious mistake of the judges appointed by the Colorado State Athletic Commission! GLORY cannot intervene in the decision but they must now repair this error by giving me the immediate rematch. I must immediately take back what was stolen!
“This scandal has rippled around the world - I received thousands of messages of support, and people expecting a rematch. That's why I have registered an official request to GLORY to make an immediate rematch in Lyon.”
Meksen and her team have tried to understand what the two judges who declared against her were seeing, but the former champion cannot find anything that she thinks might justify the decision.
“From the sport’s point of view, according to all judging criteria, I won that fight, 100% I won it,” she says.
“Now, I do not say it was the fight of my life - Denver is far from home, eight hours time difference, plus the altitude and the fact that we missed our connecting flight in the US and had an additional eight hours sat in the airport.
“I never recovered entirely from all of that. But despite that, the decision should have been absolutely clear. I won, no doubt at all.”
Meksen also fired some shots at fellow former champion Tiffany van Soest for taking to social media after GLORY 56 and calling for a title shot against Menezes.
“Tiffany’s first reaction after this fight was to call for a title shot for herself. She was fine about me being robbed. Also she says in her interviews that she does not like me,” says Meksen.
“Well, at some point you have to stop being nice to people and say enough is enough. I think there will be an Anissa from before this fight and a new Anissa after this fight. So first I will knock Menezes out and then it will be Tiffany’s turn and I will end her career.
“War is now declared. If we rematch in France I will fight not just to win but to knock her out. The most important thing is to quickly restore justice. Jady Menezes - I'm waiting for you in Lyon.”