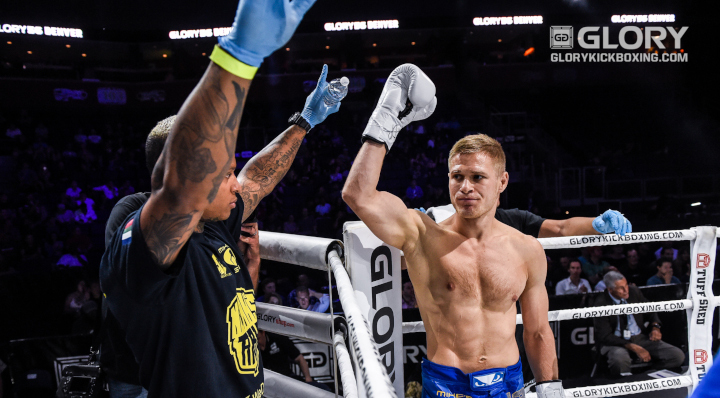 The featherweights traded inside leg kicks as they looked for openings. The southpaw Adamchuk attacked the body of Boynazarov with kicks. A late head kick attempt from Adamchuk was deflected by the high guard of Boynazarov as the frame expired.

The speed of Adamchuk was evident in round two as Boynazarov seemed perplexed by the combinations and movement. Boynazarov looked for a clean power shot, but Adamchuk never gave him an opening.

Boynazarov backed Adamchuk against the ropes and jumped for a knee, but it did not land clean. Low kick after low kick found their mark from Adamchuk as Boynazarov’s frustration grew.

A clinch in the center of the ring was the position to start round three, but very little transpired from the position. Once the pair separated, Adamchuk went back to attacking with volume and keeping Boynazarov guessing from the outside.

Boynazarov swung for the fences with his right hand, but failed to connect. A partially-blocked head kick from Boynazarov briefly stunned Adamchuk, but he quickly recovered and returned fire with a head kick and left hand of his own.

Adamchuk wore a smile on his face as the fight went the distance and his jovial bearing was validated by the judges at ringside; the former titleholder claimed victory on all three scorecards.