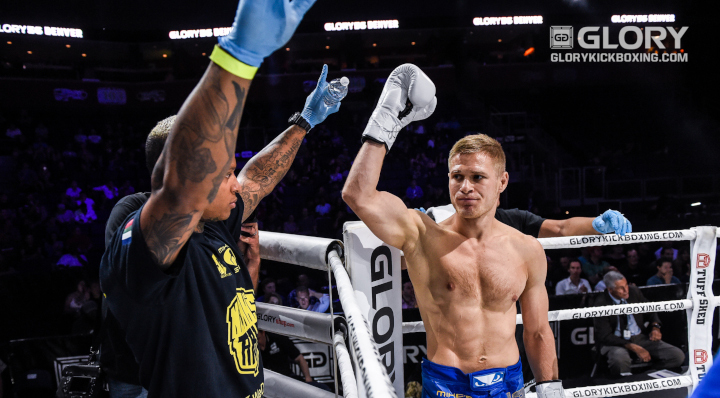 With a background in karate prior to joining Amsterdam institution Mike’s Gym, former featherweight champion Serhii Adamchuk has a few rarely-seen techniques in his repertoire.
One of them is the ‘Rolling Thunder’ kick (Do Mawashi Kaiten Geri to karate practitioners), which has the fighter suddenly launching into a mid-air forward roll, bringing his heel down in a vertical line on the opponent.
Is Petchpanomrung likely to find himself on the receiving end of it in Houston?
“Sometimes I feel like I want to do the Rolling Thunder, true, but for this fight I might have something new in my arsenal,” shrugs Adamchuk.
The two first met at GLORY 39 BRUSSELS, in the final of a Featherweight Contender Tournament. Adamchuk narrowly lost, but doesn’t see that result playing a part next month.
“He won a split decision. It was a good fight but the judge decided in his favor… well, OK, I don’t care. I don’t agree, but I already forgot about this fight and now we will have new fight,” he says.
“We don’t have a set plan. We train hard for three months and then we will see what happens on the day. He has a strong left kick but so do a lot of other guys so, that’s fine.
“The important thing about being champion is what it feels like to me, in my mind. it’s about showing what I can do.”
GLORY 63 HOUSTON takes place Friday, February 1 at the Arena Theater in Houston, Texas.