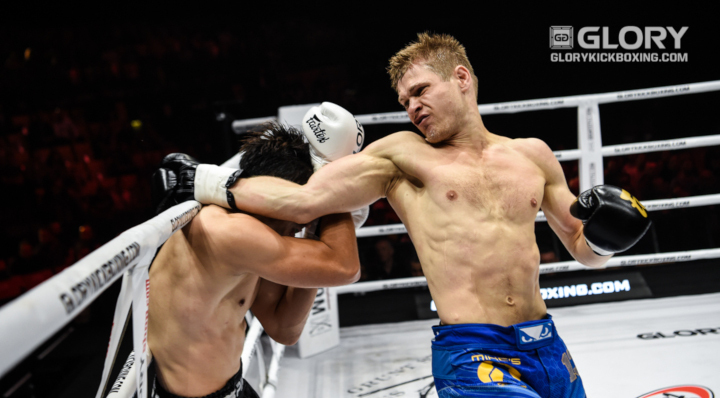 Adamchuk aiming for Denver win to get back in title contention

Former world featherweight champion Serhiy Adamchuk (37-9, 14 KO’s) is on his way to the Mile High City on his campaign to get into title contention and regain possession of the belt he formerly owned.
Opposite him, the hammer-handed Anvar Boynazarov (91-24-2, 53 KO’s), owner of one of the most punishing left hooks in the division.
This will be Adamchuk’s fifteenth fight for GLORY; he currently boasts a 9-4 record in the organization, with all but one of those losses being against current or former champions.
Adamchuk is 3-1 in his last four outings and comes into this fight off the back of winning the four-man GLORY 53 LILLE Featherweight Contender Tournament, where he beat Azize Hlali and Victor Pinto.
He and Boynazarov have met once before: they fought at the late 2015 GLORY DYNAMITE event in San Jose, California, with Adamchuk coming away the winner by unanimous decision.
In his following fight, at GLORY 25, Adamchuk relieved Canada’s Gabriel Varga of the featherweight title, holding the belt for a year before losing it back to Varga by way of a narrow decision.
Boynazarov, whose stoppage of Fabio Pinca was a nominee for 2017 Knockout Of The Year, was last in action at GLORY 48 NEW YORK late last year, where he and Kevin VanNostrand fought for the vacant interim featherweight championship.
That fight too ended in a ‘Knockout Of The Year’ contender - only this time it was Boynazarov on the receiving end.
He had dropped VanNostrand with his trademark left hook, only for VanNostrand to manage to raise himself from the canvas, beat the count and then take Boynazarov out with a lazer-accurate knee to the body as soon as the fight restarted.
Now Boynazarov looks to bounce back from that disappointment by taking a win over one of the division’s big names and shooting himself up the rankings in the process.
GLORY 56 DENVER will be carried live on ESPN2 at 12 a.m. ET / 9 p.m. PT on Friday, Aug. 10.