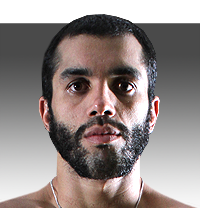 Thiago Michel has been a fighter from an early age. As a child he had to beat a life-threatening ailment which required him to undergo blood transfusions. He pulled through and was trained in kickboxing from age twelve by his own father, who remains his most devoted fan and team member.

Michel later progressed to training with the former world champion Ely Perez and the result has been a very sharp kickboxing game with a high level of offensive and defensive skills. Speed is one of his best assets; even by lightweight standards he is an extremely fast striker.

His head-movement and footwork are also excellent, making him an evasive fighter who can be hard to land a clean strike on. Michel often has a size advantage too - he has also competed in Mixed Martial Arts, where large weight cuts are the norm, and so he has learned to how to drop pounds for the weigh-in then put in back on in time to have a weight advantage on fight night.

Watch out for Michel’s use of the front push kick. This technique is popular with fighters from Thailand - and those who train in a strict Muay Thai style - but is less popular with kickboxers. Michel has made it his own - he can really hurt people with it, using it as a hard body shot to sap the opponent’s energy.