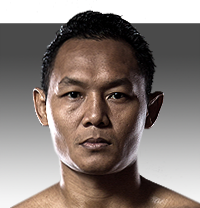 Born as Suphachai Saenpong in 1980, the fighter now known as Saenchai PKSaenchaimuaythaigym (in keeping with Thai tradition, the first is his ringname, the latter is his gym name) is unanimously and unquestionably considered one of the greatest Muay Thai fighters of all time. Many fight fans and pundits go a step further and declare him to be 'the Greatest of All Time', period.

The nascent prodigy started training at eight years old after seeing his older brother, already a fighter, come home with a trophy for winning a bout. Saenchai wanted some shiny trophies of his own so he joined the gym, turned out to be a complete natural and had his debut fight just one week after first walking through the gym doors. He won and was paid 30 Thai Baht, less than one US dollar.

At 14 he was bought from his regional gym by a major Bangkok team. At sixteen he won his first Lumpinee Stadium title and he repeated the feat two years later at the age of 18, moving up in weight as he did so. These were the first two of four Lumpinee titles he would win, an almost unprecedented feat.

Saenchai is almost indescribably good. His cat-like reflexes captivate audiences in the same way that the superhuman movement of Muhammad Ali did in his prime. Comparisons with Ali are overused in fight journalism but in this instance it is apt; such instincts and reaction speed are extremely rare.

What makes all of this doubly remarkable is Saenchai's size. For the entirety of his career, literally almost every fight he has ever had, he has faced bigger opponents. In Muay Thai his matches generally had him giving up a minimum of two pounds against fellow Thais; against foreigners he would give up twenty pounds or more and still win, such was the difference in skill level.

He is a unique talent, the kind which genuinely only emerges once in a lifetime. The art and sport of Muay Thai has a documented history going back centuries in Thailand and with fighters being trained from their infant years, the skill level is high across the board. Most of the competitors are masters of the art in their own right yet still, almost to a man, they will point to Saenchai as being the best of them: even among a galaxy of stars, he shines brighter than the rest.

He is actually credited with inventing the cartwheel kick. He says it was inspired by moves used in the Thai/South-East Asian game Sepak Takraw, or kind of volleyball in which the ball is kicked instead of punched. Fighters around the world have adopted it; UFC fans saw it in 2015 when welterweight Alan Jouban landed one flush on Matt Dwyer's neck and nearly stopped him. Afterwards Jouban praised Saenchai as his inspiration and urged people to watch his fights.

In Thailand, the sport's top honor is to be crowned a champion at either Lumpinee or Rajadamnern, the two major stadiums in the capital city of Bangkok. The Lumpinee stadium is slightly the more prestigious of the two and it was this belt that Saenchai won – in four different weight classes. He has also held titles from the World Muay Thai Council and the WBC's Muay Thai sanctioning body. Almost all of these were won and held above his natural weight, underlining his status as the pound-for-pound king of the sport.

He was also the 2010 Toyota Cup tournament champion, 2010 WMC World Lightweight (135 lbs/61kg) champion and the 2011 WBC Diamond World Champion. He has twice achieved the incredible distinction of being voted Sports Writers of Thailand Fighter of the Year, once in 1999 and again in 2008.