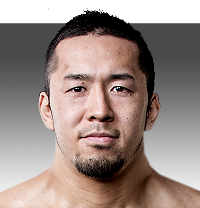 Makoto Uehara is a black belt in Shidokan Karate and formerly fought in the K-1 heavyweight division. He won several championships in Japan’s top domestic organizations and has now dropped to light-heavyweight to join the GLORY ranks.

Uehara says his favorite fighters are Gokhan Saki, Tyrone Spong and Nathan Corbett. “These are the fighters I always strive to emulate,” he says. “I want my performances to be like theirs and I want to help kickboxing return to its rightful place in the Japanese sports landscape.”

A 2013 win over Kengo Shimizu secured Uehara a domestic Japanese title and earned him a call-up to the GLORY ranks. His career victories include wins over K-1 Las Vegas champion Stefan Leko and the South Korean heavyweight Yang Soo Park, a member of the South Korea’s National Tae Kwon Do Team.