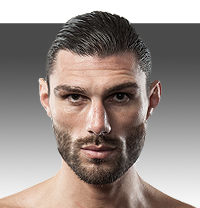 Johann Fauveau is one of the best talents ever to emerge from the French kickboxing circuit. He dominated his weight class in his native France and took some international scalps - Jordan Watson among them - en route to a contract with the GLORY World Series.

The three-time French champion is also the reigning ISKA champion at 70 kilograms. He has recently ventured into professional boxing, where he has a record of 3-1 with two wins by KO. And he has fought numerous fights under Muay Thai rules, with a record of 22-2-1 and 15 wins by KO.

Fauveau is a tough customer. He has real skill and finesse, with great timing and head movement, but he loves getting into wars and is more than happy to stand in the pocket and trade. Often he will back onto the ropes just to encourage an opponent to come forward and start throwing, giving him the firefight he wants.

His love of fight sports comes via his maternal grandfather, with whom he was very close. In the 1930s, Fauveau’s grandfather had been a personal friend of the world champion boxer Victor ‘Young’ Perez, a Jewish-Tunisian who died in a concentration camp in 1945.

Fauveau is of Jewish heritage and he was inspired by his grandfather’s stories and recollections of Perez’s exploits. Pictures of Perez adorned the young Fauveau’s bedroom wall and once he became a fighter he added the Star of David to his shorts to show his pride in his ancestry.

Karate was Fauveau’s first martial art. He started at ten years old and trained for several years before moving into the Muay Thai academy of Andre Zeitoun, godfather of the French Muay Thai scene. In Zeitoun’s academy the young Fauveau was able to witness masters at work. Among them was the world-class Jean Charles Skarbowsky, who would go on to coach Georges St. Pierre among others.